Giant Presidents' Heads
On our "vacation," we did go on one entertaining outing between all the fevers and vomiting and so forth. Now, we are unusual in that we have already been to Colonial Williamsburg too many times to count (especially NSBR), Jamestown a few times, Yorktown once, and Busch Gardens once. So we are, admittedly, scraping the bottom of the barrel. But Presidents Park has a certain schlocky charm.

Here is a picture of S. hugging JFK's tie because he was the first and only Catholic president (her idea): 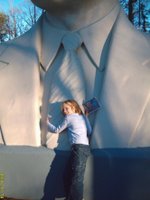 Piano, Piano, Piano (Get it, Ergo?)
We are getting a piano! It is a Steinway console with a music rack just like this: 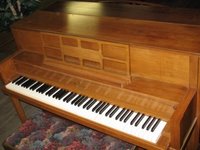 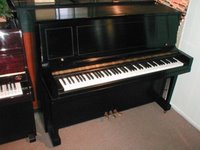 My parents are giving it to us. A friend of theirs inherited a grand and is selling this one at a good price. It is far too generous a gift, but I could not say no. I want a real piano so much (right now we have a Clavinova, which they also gave us. It's magnificent, but it's not a piano). And, frankly, my mother wants us to have a real piano so much. Her piano, the piano I grew up playing, is a Steinway console, so being my freakishly loyal self I consider it the best type of piano, preferable to a Steinway grand. And we'll have it for Christmas caroling! And the childrens' teachers will be so happy! Bliss.

Studio 60
No one is that bad at telling jokes. And I just wish they had made it that Tom couldn't tell a joke, or the rookie, or Sim...I wish they had not gone straight for a woman. It makes me hate Aaron Sorkin. It makes me want to boycott the show. But I want to know who the father of Jordan's baby is.
Posted by MomVee at 8:12 AM