As a birthday treat, S. and I are planning a trip to American Girl Place in New York. I was already looking forward to it, because let's face it, unrestrained consumerism, especially with a wholesome girlpower angle, is fun. But I just discovered that the American Girl Revue, the 70-minute musical show that will form part of our entertainment that day, was written and composed by none other than Gretchen Cryer and Nancy Ford, who wrote the landmark feminist musical "I'm Getting My Act Together and Taking It On the Road." I strongly suspect I am one of maybe ten people under the age of 50 who owns the cast album of this show on vinyl, as well as the sheet music.

*Side note: I also discovered that Jon Cryer of Pretty In Pink and Two and a Half Men is Gretchen Cryer's son! You can imagine how dirty my house is right now with this kind of internet mining going on.
Posted by MomVee at 11:05 AM No comments:

Just saw it on the front of a truck.
Posted by MomVee at 10:54 AM No comments:

Harry Potter and the Half-Blood Prince

So I'm managing to read only a little bit each morning and evening, staying disciplined in the middle hours of the day to keeping life in order and even working on my own book.

Two years ago when book 5 came out and I devoured it in two days, I felt like an addict--hangover from reading until after midnight, damaged relationship with my visiting mother-in-law, regret when it was over so soon and no more books on the horizon.

Just wanted to mention, though, that I am falling deeply in love with Albus Dumbledore. That's all I'll say right now.
Posted by MomVee at 8:25 AM 2 comments:

Allow me to heartily recommend...

The way it works is, you post something you want to get rid of, and someone else wants it and you arrange for them to pick it up. Or you post something you want, and someone else has it and wanted to get rid of it and you go pick it up. Etc. So far I got rid of an oddly-behaving boombox and a full-size metal bed frame by the first method, and a stack o' potty seats by the second.

But the best? Last weekend my area Freecycle had its first seasonal "Free-For-All": spread your stuff out on the ground and then go scout everyone else's stuff. No cash, no bartering, just take what you want provided you brought something. I scored a bedside carafe (with the little glass that covers the top) a food scale (much needed in this new regime of carb-counting) and--drumroll--

Anecdotal Leads For News Stories Reporting the End of the World
Posted by MomVee at 8:25 AM No comments:

I think it was two years ago the WSJ had a little human interest article on the voiture de ballai, the van that picks up cyclists who poop out during the Tour de France. In what I feel is characteristically European lack of tact, the van actually has a broom lashed to the top. The article quoted the long-time driver, who sagely said,

"There are many tears in the ballai."

R. and I like to say this quite frequently in a heavy French accent. I think a hand-rolled cigarette clutched in the corner of one's mouth would add to the effect.

Anyway, it has definitely acquired the status of a family aphorism.
Posted by MomVee at 8:16 AM No comments:

That wasn't the title I originally had in mind but I can't remember the one I came up with in the car.

I don't deal well with bureaucracies, and medical ones are my least favorite kind.

Also, although I feel confident that my friends and family would tell you I really am a nice person at heart, they would also feel constrained to agree that I am really terrible at controlling my tone of voice and facial expressions. So the anxiety and, let's face it, hostility that I bring to, say, a conversation with an insurance company (or today, a pharmacist) help make the bureaucratic hell a foregone conclusion. Which came first, the red-tape chicken or the MomVee bad-attitude egg?

Joke of the Summer

So, a couple of weeks ago we were cooking dinner at the beach. The club has installed new gas grills for everyone to use but Big R. stubbornly sticks to our little Weber full of hardwood charcoal. There weren't a lot of people down because it was pretty windy. All our smoke headed for the porch despite our best efforts and it did seem to concentrate on the one group of people eating pizza at a picnic table. We tried to correct it to no avail.

Anyway, then this guy walks over to the pizza-eaters and yells heartily, "So, you guys getting SMOKED OUT here? Looks like you're getting SMOKED OUT!" They shrugged, shook their heads and tried to continue eating their pizza, but this dude continued to shout his favorite phrase about 12 times, until he finally convinced them to move to the upper deck. Then when they got up there he loudly said things like, "This is much better, you're not getting SMOKED OUT! Boy, you can really get SMOKED OUT down there."

Now, normally in a situation like this R. would be sanguine and I would be writhing with humiliation. But I broke through some kind of wall and roles were reversed. So while R. finished cooking the steak, I stood next to him whispering things like, "Gosh, I hope we didn't smoke those people out." And while we ate I said things like "You know what, honey? Tonight after the kids go to bed? We should smoke some people out." When I could say it, because I was laughing until the tears ran.

And now I can't stop. I told a lot of our friends, so now whenever R. sees someone he hasn't seen in a while, they say, "Hey, smoked anyone out lately?"

Dorothy Parker, You Said It

If I had a shiny gun,
I could have a world of fun
Speeding bullets through the brains
Of the folk who give me pains;

Or had I some poison gas,
I could make the moments pass
Bumping off a number of
People whom I do not love.

But I have no lethal weapon-
Thus does Fate our pleasure step on!
So they still are quick and well
Who should be, by rights, in hell.

Yeah, have I mentioned how much I hate doctors?
I'm in the anger stage now. Clearly.
Posted by MomVee at 9:36 PM No comments:

It's not too late!

1. Roll on your side down a grassy bank--check.
2. Make a mud pie--well, he's definitely played in the mud
3. Make your own modelling dough mixture--yes
4. Collect frogspawn--no. Today's kids don't do nearly enough roaming around town, and we live in a swampy, creeky town so there's really no excuse. I never did it either, though.
5. Make perfume from flower petals--no.
6. Grow cress on a windowsill--no, but we've grown other things.
7. Make a papier-mache mask--no.
8. Build a sandcastle--many.
9. Climb a tree--many.
10. Make a den in the garden--no.
11. Make a painting using your hand and feet--yes.
12. Organise your own teddy bears' picnic--no. I'm sorry, but some of these are just more girl things than boy things.
13. Have your face painted--yes.
14. Bury a friend in the sand--yes, buryer and buryee.
15. Make some bread--yes.
16. Make snow angels--yes.
17. Create a clay sculpture--yes.
18. Take part in a scavenger hunt--no.
19. Camp out in the garden--well, at the beach club.
20. Bake a cake--yes.
21. Feed a farm animal--yes.
22. Pick some strawberries--apples.
23. Play Pooh sticks--yes.
24. Recognise five different bird species--and how.
25. Find some worms--yes, although only S. will touch them.
26. Ride a bike through a muddy puddle--you betcha.
27. Make and fly a kite--make no, fly, yes.
28. Plant a tree--no.
29. Build a nest out of grass and twigs--probably.
30. Find 10 different leaves in the park--maybe not quite 10.
31. Grow vegetables--yes.
32. Make breakfast in bed for your parents--still waiting, dude.
33. Make a mini assault course in your garden--I don't even know what this really means, but it sounds like a boy thing. I'm sure he'll get right on it.

Posted by MomVee at 1:19 PM No comments:

A Bit of Fun

Apparently my brain tends slightly toward the male profile.

Just don't tell my husband that while he's taking a sip of anything.
Posted by MomVee at 8:04 AM No comments:

Say A Prayer for London 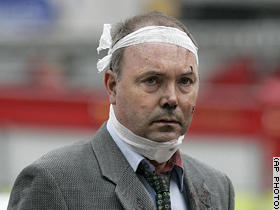 For some reason this picture really spoke to me. Unfortunately I can't find the bigger frame version, in which I swear he was carrying an umbrella. Anyway, he makes me think of Mr. Banks from Mary Poppins, and he looks like Mr. Banks--stoic but a tad overwhelmed, as if the world is too much with him.

While we were on our non-vacation helping-in-laws-move trip down south last weekend, not-so-little R. was diagnosed with Type I Diabetes (the insulin-dependent or "juvenile" kind).

I may or may not write more about it later--if I forget, remind me to tell you why I am so angry at one Dr. J. of our pediatrics practice--but right now I'm just done. We managed to get home last night and spent most of the day with doctors, but avoided hospitalization.

A whole new life of finger-sticks and injections lies before us.

More later.
Posted by MomVee at 7:50 PM No comments: