"I want very badly to be someone else without going through the effort of actually changing myself into someone else."
Isn't It Romantic

"Chip told me that Libby doesn't really spend the day mopping and catching tadpoles with Chip, Jr. She may be mopping with her hands but with her mind she's reliving the water imagery in The Faerie Queen."
Uncommon Women and Others

"SCOOP: Why do you cover your mouth when you talk about sex?
HEIDI: Hygiene."
The Heidi Chronicles

Things you don't want to overhear...

...the workmen saying as the job nears completion:

But, huge progress today. I finally found someone who says "No job too small" and means it, and he is installing our new medicine cabinet a mere 15 months after we ripped out the old one. He is also installing a vanity light and remediating the freakish arrangement of switchplates that I allowed our electrician to install and to which not-so-big-R. said, "Um, no."

After this work is done we can go forward with painting the bathroom; and if we get that done by June it will have been only 7 years since I stripped the old wallpaper. No sense rushing these things.

And I took S. to the pediatric cardiologist, who said her murmur was absolutely nothing to worry about. All in all, a good day.

Posted by MomVee at 2:42 PM No comments:

Why do we even take pictures? Why?

Have you seen the advertisement for this new pre-fab scrapbook from Hallmark? Let me first of all say that I have been not-so-enthused (unlike, apparently, every other suburban mother out there) about the scrapbook thing. Glueing down an average of 1.5 snapshots per page, those snapshots cut into the shape of a birdhouse, surrounded by $17 worth of special stickers, calligraphy and bumpy crap, just didn't appeal to me.

But back to the ad. It posits that if we will only buy this special scrapbook and send Dad out with the kids for the afternoon, we mothers will then be able--in a leisurely, apparently almost physically pleasurable manner, involving a hot beverage--to organize all of our photos in the manner that is agreed to be aesthetically pleasing by today's bourgeoisie.

Maybe your photos, babe. I have a stack--a pile--nay, a mountain of photos that have gone unorganized since 1996. There is an album 3/4 filled with pictures documenting--in nauseating detail--not-so-little-R.'s first nine months or so. There are some piles of snapshots with rubber bands around them and scraps of paper on top saying "Jan--Aug 1998." That project seems to have been undertaken sometime in 2000, which makes sense because it was about midway through the longest inter-baby period. Many, many unsorted snapshots, stuffed into the sideboard, sometimes resulting in bending. School portraits and class photos. Sports team photos and individual sports portraits. Studio portraits.

But today I have taken one small step, and it was not buying the special Hallmark scrapbook, much as I wanted to believe the commercial. I took everything (photos etc.) out of the small, right-hand side section of the sideboard. I took everything (silver platter, baby china, salt and pepper shakers, toast rack, Revere bowls) out of the big center section of the sideboard. And then I put it all back in the opposite place.

In light of the finalists for the National Book Critics Circle Awards, I will say this:

Instead of making me ponder whether clones created for organ harvest would have souls, it made me wonder if I still had a soul after the torture of reading the entire book. It made me wonder if Kazuo Ishiguro has a soul. And while we're being honest, I'll just say I didn't think The Remains of the Day was all that great either.

But I loved Saturday, and it is not nominated.

We now return you to our regularly scheduled stories about clothes, shoes, and washing clothes.
Posted by MomVee at 2:55 PM No comments:

A really long post about two family sayings and a dress

My parents like to say "We change everything" when they do a total 180 about something. It's what Frank, the wedding planner, says in "Father of the Bride" when he sees their house for the first time: "Beautiful, beautiful...we change everything."

S.'s First Communion is coming up in April. For years I have been strategizing about the dress, and although this makes me sound like a horribly shallow person, let me emphasize that we have not neglected S.'s theological and spiritual education. My concern about the dress was twofold: 1) I have seen some horrific First Communion ensembles 2) 8-year-olds are not known for their fabulous taste. So I pictured S. clinging to--I don't want to offend anyone, so I'll say, a white brocade dress trimmed with marabou feathers and iridescent sequinned butterflies on boingy antenna-like things--clinging to it, sobbing, as I drag her out of the store. I also cherished a hope that we could find a dress that was simple and somehow unique. I persist in this belief that an off-the-rack garment can be unique despite my knowledge of how mass-produced everything is, but that's probably for another post.

Anyway, I had a notion that satin was the ultimate evil, and started trying to steer her toward matte finishes and simple lines. I would prefer that she have sleeves, so I planted that idea. We looked at dresses in wedding shop windows and I was heartened by her interest in plain satin dresses with minimal trim--it was a start.

I told my mother what I really wanted was something matte finish and preferably natural fiber--cotton batiste, linen, organdie. She knew of a store down the shore that might have the right thing. Then I walked by a store downtown that was advertising a First Communion trunk show, and I made an appointment for the heck of it.

We got there and started going through the racks. I know from observing my mother-in-law, shopper and clothes horse extraordinaire, that one should try on lots of different things, so we were already in the "we change everything" trajectory as S. and I loaded our arms with satin dresses, sleeveless dresses, heavily beaded dresses...

She began trying them on. This blog is technically semi-anonymous so I can brag on it (I just made up that rule) and say that S. looked incandescently beautiful in all the dresses, but it was immediately apparent that natural waists and big pouffy skirts do not flatter her. We put aside a couple of dropped-waist possibilities, but I pretty much expected to walk out and never return. And then, I played WWMILD (What Would Mother-in-law Do?) once more and said, "Hey, do you have anything with an Empire waist? Or princess cut?" They brought me a princess cut dress another girl had in her dressing room. I dropped it over S's head and zipped it up. Almost before the folds of the skirt had stopped swishing around her legs she said, "I want this one." And her instincts were right. It was the first dress all day that made her look gloriously herself--S. wearing a pretty dress instead of a pretty dress wearing her.

So, okay, I thought, maybe we should now go to other stores and look at dresses with this information in mind. But the situation was no longer in my control, as the salesladies, intoxicated by S.'s delight in her dress, were showing her various sparkly tiaras. We change everything. Everything I said I didn't want was in standing in front of me: satin, beaded, akin to a miniature wedding gown, complete with tiara and veil. Sigh. Standing in front of me looking gorgeous and happy.

So then I had, another thing my mother says all the time, a revelation from God. S.'s First Communion is not an occasion dedicated to proving my incredibly understated, preppy, natural-fiber still-WASPy-despite-the-conversion good taste. And why the hell shouldn't she look like a little bride? Wouldn't every one of us kill to have more than one chance in life to look like a bride (without a snag like widowhood or divorce to sour the pot)?

And why should we spend the next month going from pillar to post looking for the perfect dress when S. thinks the perfect dress is right here, today, in the first store we tried? (Which is, incidentally, akin to the way I bought my wedding dress, by myself, first one I tried on.)
Posted by MomVee at 7:49 AM No comments: 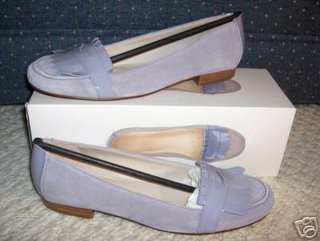 My whole day is made because I bought these shoes. They are adorable and dainty. They are my favorite color. They cost $6.97 on sale at the Gap, presumably because no one else with feet my size felt it was practical to own lavender suede loafers with patent leather kilties. Their loss.
Posted by MomVee at 4:36 PM No comments:

Things we didn't know were lost

Some of the more mentionable items found when I opened the pullout couch today:

Someone in a Tree

Go read a brilliant post about music and memoir here.
Posted by MomVee at 7:49 AM No comments:

So, today not-so-little-R. had his first "follow-up" appointment with the pediatric endocrinologist.

We were supposed to follow up after three months, which would have been October. Yes, it is January. This is 85% the result of my own negligence, and maybe a soupcon of denial. But it is 15% the fault of a receptionist who said, "Oh, we're really busy, can I call you back in a few minutes" and never called back. Anyway, I pretty much expected to get verbally spanked for this, and also because I haven't e-mailed blood sugar numbers for 6-8 weeks and I'm supposed to do it every week. Before you report me to DYFS let me just say the numbers were great and I knew they were.

So I was dreading the appointment with my usual "They're going to think I'm a bad mother" anxiety. It was okay. I explained--although my explanation amounted to little more than "I didn't make the appointment in time"--and they very nicely said, "Oh, okay. Explanation." And the visit went great, and fast, and R.'s doing fine, etc. I didn't realize how much I was dreading it until I walked out feeling like superwoman. And it made me wonder how much more I would have enjoyed Christmas vacation without this hanging over my head.

On the way to the hospital I noted some serious flooding in a nearby town--we're talking park benches surrounded by water. I vaguely wondered what this might mean for our basement, then forgot about it.

When I got home from the doctor I indulged myself all afternoon with chocolate, lattes and reading. Around 5 pm I decided to be really productive and put in a load of laundry. And I stepped into the inch of water covering the basement floor. The sump pump just can't keep up. So I spent two and a half delightful hours wielding the wet-dry shopvac and watching water seep up through cracks almost as fast as I could vacuum it up. Conservatively, based on how many times I emptied the thing, I would say I vacuumed 20 gallons of water. I think it's slowing down now. But this really rots.

Upside: I threw away two garbage bags full of ruined stuff that the kids had left on the floor and I know from prior experience that we will never miss it.

Also: I figured out what I want to play on the mandolin above all else: "Back In The High Life." And I found the chords online.
Posted by MomVee at 8:30 PM No comments: