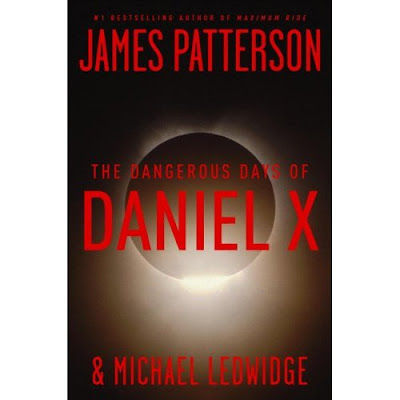 The Dangerous Days of Daniel X bears a red and white box on its back jacket flap that looks like a warning, but is in fact a reassurance: "In the spirit of the most enduring hit movies and books, James Patterson has written this story for readers from ten to a hundred and ten. Special care has been taken with the language and content of The Dangerous Days of Daniel X."

That is evident. Daniel X has it all when it comes to thrillers for little men: lots and lots of action, violence (just scary enough), and a soupcon of romance (mostly yearning and an occasional embrace). The promotional materials are focused on getting reluctant boys to read, and this book is calculated to keep the pages turning.

Unfortunately, neither I nor my 12-year-old son could be described as reluctant readers. While we were intrigued by the original premise--Daniel X is an alien hunter with the ability to create and manipulate matter, sworn to avenge the murder of his parents--we were distracted by the 92 two-to-three-page chapters, and maybe even a little fatigued by the necessity for 91 cliffhangers. However, I'm sure this structure is gold to parents who are wheedling their sons to read just one more chapter before going out to play (or staying in to game).

James Patterson has an enviable imagination. Pitting a creator against an army of destroyers is a great twist in the eternal battle of good versus evil. As we learn more about Daniel's origins there is a sort of Superman homage; Patterson knows his superhero tropes and uses them well. I don't know much about Patterson's views--though I notice he wrote a book based on the Fatima apparitions--but I thought I perceived a subtle pro-life message in one of the book's quieter twists. To say more would be to spoil it.

My son had some concerns about the exact nature of Daniel's abilities and the consistency with which they are portrayed, but he is a harsher critic than I--whether because he has a keener intellect or because of incipient adolescence only time can tell.

The Dangerous Days of Daniel X is a page-turner; it moved me, it made me laugh, and it kept me on the edge of the beach chair, holding my breath. Patterson and his co-author Michael Ledwidge should be very proud of their creation.