Did anyone else watch The Magic Garden?

A few years ago--probably more than three but fewer than six--I bought a nice, heavy varnished pine toy chest with heart cutouts from a garage sale around the corner, with the idea of refinishing it and putting it at the end of our bed for storage and seating. Probably within a year after that, I stripped it, which experience was, I guess, so demoralizing that nothing else happened for quite a long time.

In addition to getting rid of the movies I'm not going to watch and the books I'm not going to read, I have decided that any garage sale furniture that doesn't reach its intended destination by Labor Day is going out the door as well. So this week I painted my blanket chest in palest blue, and I think that color, coupled with the hearts, gives it a nice Swedish Country look: 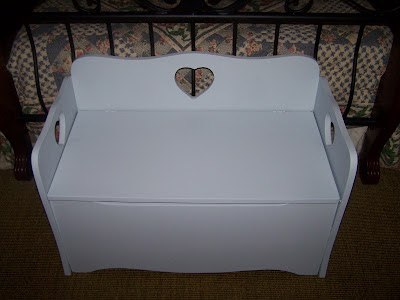 Especially paired with my fjord painting: 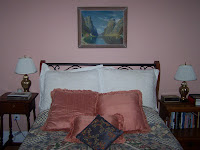 And my faux-Swedish-Country-armoire, which I managed to paint within a week of acquiring it, 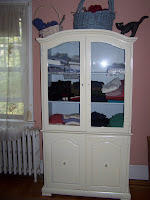 because it was huge and in the living room. In fact, my Decorating Tip for today is, "Don't put your garage sale finds in the basement." NB the inside of the armoire is the same color as the chest--I used the rest of the paint, hooray!

As I told my sister-in-law, I count this as a triple achievement:

I knew there was a book I was forgetting in my roundup yesterday. One day last spring I took the magazines to the recycling center and found in the dumpster:

So last week I read The Little Minister. I don't like Peter Pan very much, and I am permanently prejudiced against poor Mr. Barrie's dramatic works by the scathing reviews in The Portable Dorothy Parker; but he was a very successful writer in his time and I wanted to see what the fuss was about.

He spins a good yarn, and it's absolutely dripping with sentiment. I don't think I'll be spoiling anything for anyone with this next observation, because I suspect none of my eighteen readers has as much tolerance for broad Scots dialogue and Victorian hoo-ha as I do, but just in case,

The denouement, the big reveal, in this book is that the gypsy girl and Lord Rintoul's intended are one and the same. I spotted this twist on...I'm going to say page twelve. Were turn-of-the-century readers so unobservant, or were they, like me today, just along for the ride?

Edited to add: slightly spooky, Arts and Letters Daily today makes me aware of an article in the Telegraph about Barrie and his (previously unknown to me) connection with the Du Mauriers.
Posted by MomVee at 8:40 AM

The Magic Garden! Paula and Carole were my first live concert, and we've kept the weirdness alive by burning a (surprisingly, much-loved) CD for the next generation.

And speaking of burying the lede, woohoo! Congratulations!