First, not-so-little-R. appeared in the spring musical at school: 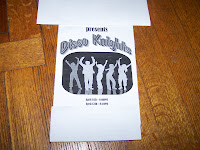 which involved a lot of rehearsing and giving homework short shrift. R. and I attended both performances, because I subscribe to Alice Trillin's philosophy as described below by Calvin Trillin:

"My wife's policy on attending school plays (a policy that also covers pageants, talent shows, revues, recitals, and spring assemblies) is pretty well known: she believes that if your child is in a school play and you don't go to every performance, including the special Thursday matinee for the fourth grade, the county will come and take the child."

How did attending two hour-plus performances and driving someone to a handful of long rehearsals keep me from blogging and make the house a complete mess? I don't know, but it did. I did also iron his costume. And design it.

And then, and then, when the play was over, it was time to kick into high gear on The Project: 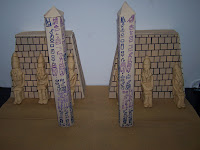 We call this The Temple at Luxor for short, but it is really "The entrance pylons, six colossal Rameses statues and two obelisks from the temple at Luxor," because after R.'s topic was approved I took a good look at the online resources, virtual 3D models, and aerial views of the temple and asked, how can we scale this back? And by scale this back, I mean, "plan this project so that it very nearly breaks us, but not quite." My job? Apart from teaching my son how to make pylons and obelisks out of foam core and paper towel tubes when I don't really know how to do that myself, my main task was to stand at the top of the basement stairs with a whip and keep him seated at the craft table for hours upon end as he sculpted the statues: 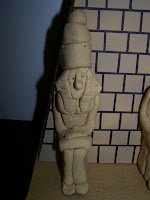 and inscribed the hieroglyphics: 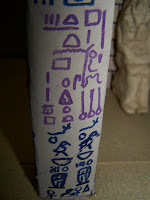 Did I mention the five-hour track meet on Sunday for which I was inadequately dressed? When will I learn that sporting events in April require warm clothing? The coldest I have ever been in my entire life was at the Vet in the spring of 1992. I was wearing a lilac cotton cable turtleneck and green-and-lilac checked linen blazer. They were very cute, and they were not warm. But I digress.

What was I talking about? Ah yes, this is what I, and my son, have been doing with our time. The poor thing sat with me at the dining room table yesterday morning, eating his breakfast and trying to look with satisfaction at his completed project, but really only able to see the ramp, with all the projects of high school and college sliding down.

Coming up: the post on romance I promised C-Belle, the return of the poetry podcast, and why I feel uneasy about the polygamous sect in Texas.
Posted by MomVee at 1:57 PM