I have lots of things to post about but my children are home on vacation this week, so it's harder. For right now, I'll just mention this. As loyal readers know, I love Joan of Arc. Of all the images of her, I like this painting best: 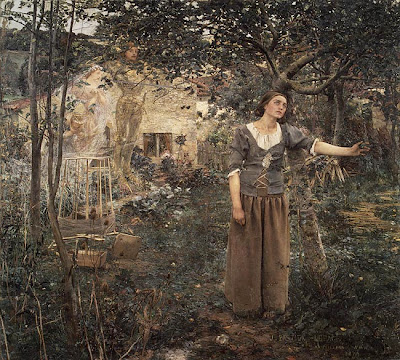 I'm not sure how old I was the first time I saw it, but I was at least ten, because my room was already painted lilac on top of the original pink. I bought a print and it has been hanging wherever I lived ever since.

My parents took R. and S. to the Met yesterday so R. could further immerse himself in the Egyptian collections and S. could pursue her interest in Japanese art; but also so my mother could indoctrinate her into 19th-century European painting. She started with this painting, and S. held forth at some length about how it looks just like me.

I guess I have been channeling that painting for years. For a while, in college, I consciously tried to look like this image of Edna St. Vincent Millay: 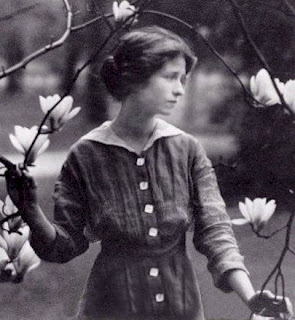 The two are not dissimilar. One problem is that I don't have this good a profile. Another, bigger problem--in modern life one only has so much time to stand around looking soulful while vaguely holding onto tree branches.

I do love that photo. What sensible young woman wouldn't want to look like her?