I love this older children thing. Last night we carved three pumpkins before NSBR got home, and it wasn't anywhere near as bad as I remembered. I cut the lids out and NSLR and S. did almost all the rest--I did a little finishing-touch gut-scraping for M., and I transferred her design and carved it, but R. and S. did their own. One thing that helps is these little saws they have now, so you no longer have to use a huge and scary carving knife for the whole job the way my father did it.

S: Mommy, how old were you when you first carved your own pumpkin?
MV: 26.
The children laugh
MV: No, I'm serious. Grandpop wouldn't let me anywhere near that thing. 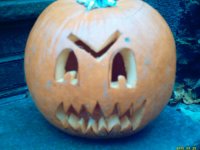 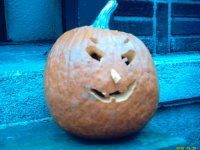 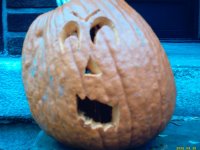 R.'s is supposed to wear a wizard's hat with attached wig, but that pesky fear of fire causes me to whip off the hat whenever he's not looking. 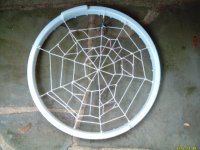 M.'s Costume Odyssey--Yet Another Unmarketable Skill
In, oh, August, M. said she wanted to be a fairy. So I got down S.'s old fairy costume (which I made) from the attic, and she gave it the okay. Then my mother (without, apparently, ever realizing that this was insulting to me and my handiwork) bought her a fairy costume from Marshall's. M., bless her heart, stood firm.

Until Sunday morning, when everyone was getting dressed for the town parade. I keep all the old homemade costumes in a plastic zipper bag, and when I opened it up M. spotted R.'s Wilbur costume (from the year he was Wilbur and S. was Charlotte, the year I despaired of ever winning a prize in said parade). She wanted to be Wilbur. The costume fit and was reasonably intact, there are many medals among the dressup clothes in the basement, but the web was dismantled long ago.

So I made a spider web out of kitchen twine and the top of a laundry basket in under an hour. I painted it with sparkly glaze. I attached a spider ring since we lacked a humanoid Charlotte this time around. Please tell me you can read the "Some Pig" message woven into it, even if you can't.

But did M. carry the web in the parade? No, of course not! "Why didn't you carry your web in the parade, honey?" "Nana was carrying it for me." Right. And can you bring a web to school? No, no props in school. And of course you can't carry a web while you're trick-or-treating and need all available hands for grabbing candy.

So does anyone have ideas about what to do next with this web, other than publishing it here so my average 8 readers a day can see it (or not see it, judging from the amount of time 7 of my daily readers spend on the page)? So far I've got:

--Put it in the attic and let the children deal with it when I die.
--Hang it in the girls' bedroom.
Posted by MomVee at 7:45 AM