My Refrigerator Is Not Really Sideways 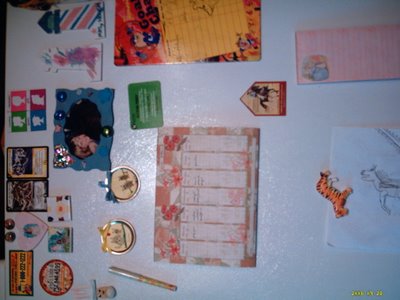 And I am not cut out for a blog audience of more than 2.

There was nothing on my refrigerator until my children hit school age. Turns out magnets is a very, very popular thing for children to make and give their parents on all the big parental-gift occasions. And what am I going to tell my Three? Mommy was aesthetically scarred by an anti-fridge-decoration roommate?

In vaguely left to right and top to bottom order:

Poison control magnet. Two marble magnets I made a la notmartha. S's school picture on a wooden heart and two magnetized Duelmasters cards. (Not-so-big-R.'s favorites. Not.)
Four dollar-store magnets S. got as favors at the Father-Daughter dance: they say "Sporty,""Girly,""Romantic" and something else bizarre. Local pizza guys. Two nifty tiles, by not-so-little-R. and S. S. with a dog practically smothering her in a wooden frame. A lighthouse magnet I decorated as an example, followed by the one M. decorated. S.'s lighthouse is cut out, as are five bazillion swim meet ribbons. Uncle Sam. Pen that matches weekly calendar pad. Weekly calendar pad on which I often write the week's menu, when there is a week's menu. It says we're having ham and escarole soup today. I have the ham and escarole, but can't find the recipe or anything like it online. Thumbprint cats and thumbprint owls. Health insurance company magnet. Tasmanian devil job chart that no one ever took seriously, and why should they? I mean, it's the Tasmanian devil. Think he ever helped his mother or put his shoes away? Let alone practicing the piano.

Some new video series from Ignatius Press, up there because I liked the cowboy. Peter Rabbit pad for grocery lists. Tiger magnet (my favorite) holding up R.'s totally excellent picture of a horse and chariot.

This is more interesting than what I had for lunch how? (Taco Bell bean burrito).
Posted by MomVee at 2:54 PM