Notes From All Over (My Brain) 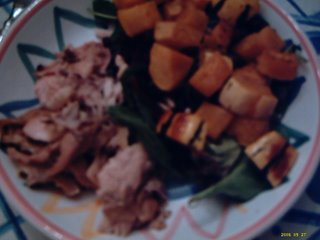 Have you ever cooked one of those turkey breasts the turkey sellers came out with so they wouldn't have to make all their money in November and December? And it smelled so, so good as it was baking but then you ate it and there was no dark meat and it tasted like nothing? Okay, part of that is because turkey is in the smells-better-than-it-tastes triad (coffee, popcorn, turkey). But I have one word for you, one word that will revolutionize your turkey breast consumption:

Yesterday I slow-cooked a turkey breast according to this recipe (except I used 1/4 cup of Rex Goliath Pinot Noir instead of a 1/2 cup of white, because that's what was sitting on my counter. Oh, and fresh herbs).

And then I made a delicata squash salad. To this recipe I added some nutmeg, cinnamon, cardamom and cumin. I have to mess with everything. I love delicata squash because you don't have to peel it, and have I mentioned that I am lazy? It's a big part of my self-image.

To tell this next story, I need to use a real name. For those stalkers who manage to find me and my family based on this information, more power to you.

The music teacher at my kids' school is named Mr. Fitzpatrick. When I picked up M. from school yesterday she said, "Mr. Saintpatrick taught us a new song today." "It's Fitzpatrick, honey," I corrected. She thought for a moment. "When I'm older I'll know what his name is," she decided.

I feel that way about so many things.

Ergo has a great post up. And I'm not saying that just because I'm mentioned in it.

I have too many scary swirly thoughts about the preservation of literature to start talking about it at this time. But I have a tangential concern--the lack in spontanaeity and the over-personalization of music delivery. I have tried to express these thoughts to my husband and can't quite get through to him, but here goes:

There are quite a few songs I absolutely love but for some reason are not in my collection: e.g. "The Boys of Summer," "Come On Eileen," "Are You Lonesome Tonight," "Lean On Me." They're mostly not in my collection because I had a rule when I was young: no buying an album for just one cut. When they come on the radio, I turn it up (and if it's "The Boys of Summer" I open the window).

Now you can buy one cut. But I resist for at least two reasons:

1) I don't like my music existing only on a hard drive. It seems dangerous to me. Silly, probably.
2) I think the treat of something randomly coming up on the radio is an important experience.

And the flip side of reason number 2 is it's good to let the radio happen to you sometimes, even the songs you don't care for. It's kind of like taking a few bites of your squash before you get more turkey. I don't like the idea of everyone out there with their Ipods tailoring their entire day's music, every day. And don't get me wrong, I love the playlist. I wouldn't have kept up with the running without it. (Yes, I have kept up with the running. Another post.)

But my antiquated car stereo has 12 FM presets, for goodness sake. If I can't find anything I like on there I turn the radio off. And that's good too.
Posted by MomVee at 8:26 AM